An explanation of the issue:

As small employers grow in number of staff, they become eligible for increases to the Non-Evidence Maximum (NEM) levels for Life and LTD coverage.  An NEM is the amount of coverage an insurer will offer without any medical questions (evidence) being asked for.  As an example, a small group with 5 staff might have a $1,500 LTD NEM.  If an employee earned $36,000/year, or $3,000 a month, they might be eligible for an LTD benefit that would pay a $2,000 monthly benefit (in the event of total disability).  In this example, the first $1,500 of benefit would be provided with no questions asked. The next $500 worth (to get to the $2,000 total) would require to the employee to respond to number of medical questions, and if approved, the employee would then move to the $2,000 level of coverage.

The problem begins when the employee is declined the excess ($500 of coverage) and held at $1,500.

Now let’s assume that the group grows through the year from 5 to 10 staff, and is now eligible (due to that growth) for an increase in the NEM to $2,500.  The advisor requests the NEM increase, and it is implemented at the renewal.  This means that the next employee hired (at the same earnings) would be provided the $2,000 benefit with no questions asked (as under the $2,500 limit).

The problem is that many insurers would leave that previously declined employee at the older, lower level of coverage of $1,500.  As a result, the employee is disadvantaged based solely on their date of hire.  I don’t think that this employee inequality is good for any party.

Benefits Canada has now picked up the story HERE

We have over 80% of in the industry in alignment (with 10% pending change).

I’d call that a win.

Here is the interesting part.  Most insurers would actually move the employee to the new NEM, if any of the following situations occurred.

In all these scenarios the employee(s) would be moved to the higher NEM. So why not, when the advisor and their client remain loyal to the insurer, are they not in return?

We posed the following question to insurers…

A employer has a group plan in place with life &/or LTD coverage. The employee count increases through the year, and as a result they are entitled to an increase in the NEM level(s). At renewal, the advisor (with client consent), makes a request that the plan be amended to the new higher increased NEM.   Do you….

1.  Increase any employee(s) to the new NEM that have not already applied for the excess LTD above the NEM?

2.  Increase any employee(s) to the new NEM that have not already applied for the excess LTD above the NEM, AND also increase those that are in the process of medical underwriting?

4.  NOT offer to increase the NEM, if there is anyone that was previously declined?

5. Handle these situations in a different way? If so, please provide details.

The survey responses are as follows…

Great West Life/Canada Life was the industry leader in this area.  They began the practice of increasing declined employees (held at an NEM) on their small groups (under 35 lives) to the new, higher NEM as far back as early 2013. 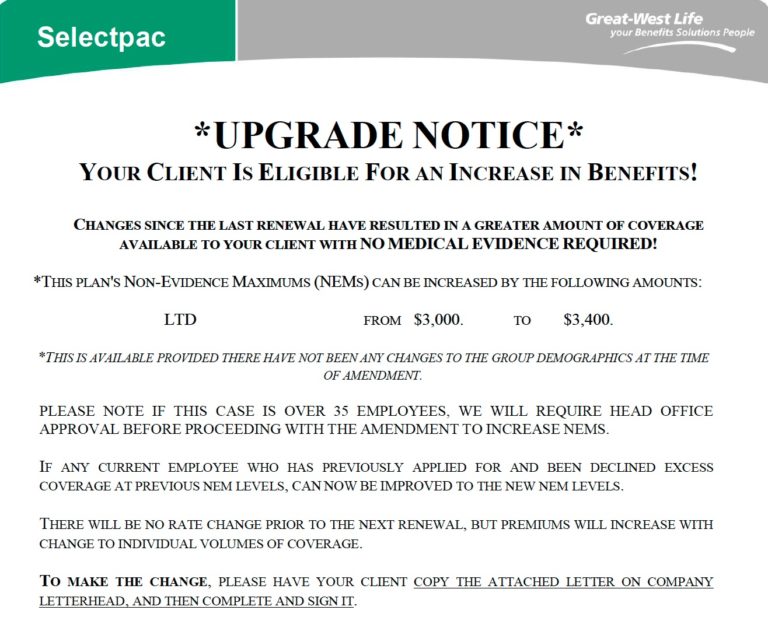 Manulife announces that they were changing and aligning their practice

Sun Life announces that they were changing and aligning their practice 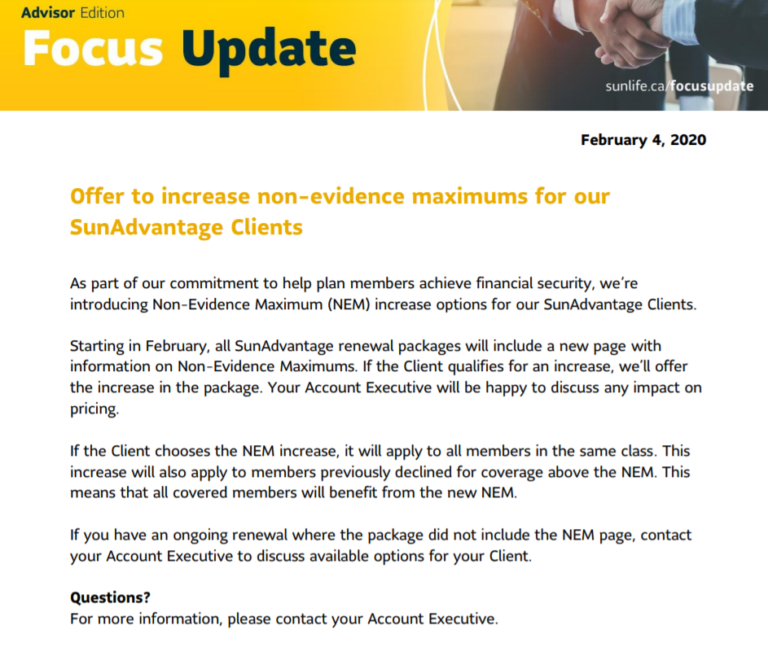 Empire Life had announced the change last year but the contract wordings and communications have been going out with renewals. Click on the image below for the full set of amendments. 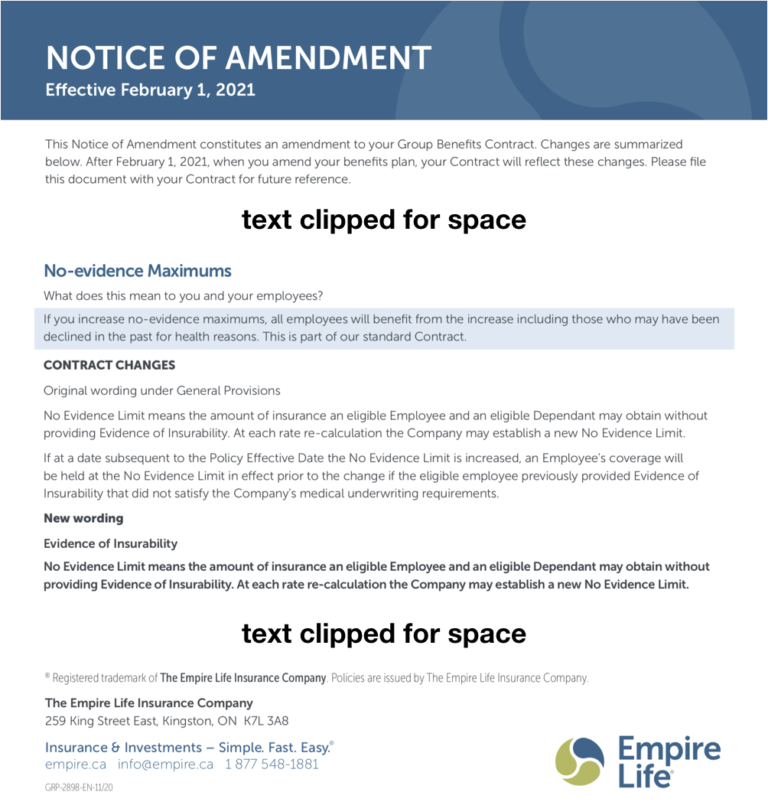 Great to see RBC come to the table and put our clients first.

Great to see Co-op add their name and put our clients first.

Great to see BBD both add their name to the list and communicate it so well to advisors and clients.

To better protect plan member health, we are updating our Contract and Booklet wording to reflect changes to our Empire Life pooled benefits.

This is to confirm with you that Humania does NOT hold back members from the benefit of a higher NEM when the group’s NEM has increased.  This applies even if they were previously declined.

Wawanesa confirms that option #3 (as highlighted below), is how we approach the NEM issue.  If a Plan Sponsor elects to increase the NEM for the entire group or a class, all eligible employees will have their volumes recalculated up to that new NEM regardless of when they were hired.

Benefits Canada has now picked up the story HERE

We have over 80% of in the industry in alignment (with 10% pending change).

I’d call that a win.

We applaud the many insurers for taking the time to respond to the survey and who work with us to ensure both advisors, our clients and their employees are treated fairly and equitably.

Initiatives like this that help bring the industry together rather than creating reasons to be divisive. It kind of makes you wonder what exactly the CLHIA does anyway if not taking this kind of initiative.

We look forward to working together with these insurers on other initiatives in the near future.

This project was an initiative of Dave Patriarche, the founder of CGIB. CGIB is an association dedicated to advisor education and not an advocacy group. The results posted here are for general public reference only and should not be construed as a CGIB initiative, or that it has been supported by CGIB members in any way..